Host/Pathogen Interactions in the Intestine

How do organisms defend themselves against infection using ‘non-professional’ immune cells? In the Troemel lab we are addressing this question with the nematode host Caenorhabditis elegans. C. elegans provides a convenient system for studying intestinal infections, because it has a transparent body plan that enables visualization of infection in live animals. C. elegans also has a short lifespan and many genetic and molecular tools. Furthermore, C. elegans has intestinal epithelial cells with structural and functional similarity to human intestinal epithelial cells, so what we learn in worms may be relevant to human intestinal health.

We have studied the C. elegans response to several different pathogens, but are currently focusing on response to microsporidia and the Orsay virus. Microsporidia comprise a phylum of fungal-related pathogens and are the most common known cause of infection for C. elegans in the wild. C. elegans responds to microsporidia infection with a robust transcriptional response. Surprisingly these microsporidia-induced genes are also induced by infection with the Orsay virus, which is a 3-gene RNA virus found infecting C. elegans in the wild (Bakowski et al, 2014). Microsporidia and the Orsay virus are molecularly distinct, but both are obligate intracellular pathogens of the intestine. We have named this common transcriptional response the “Intracellular Pathogen Response” and it appears to represent a physiological program that promotes defense at the expense of growth. 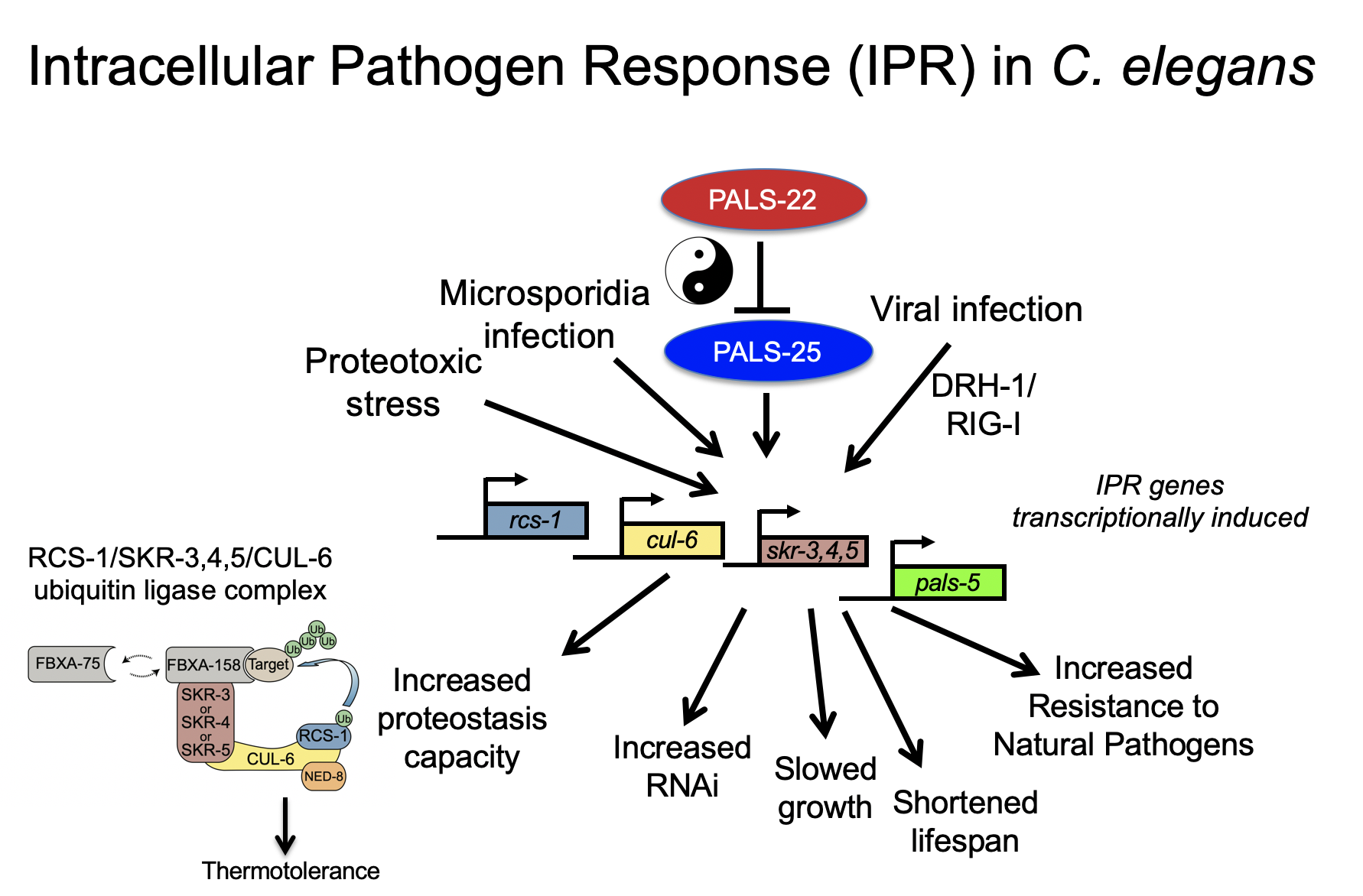 We have studied the effects of IPR activation through analysis of mutants that have misregulated expression of IPR genes. For example, pals-22 mutants have upregulated IPR gene expression in the absence of infection (Reddy et al, 2017), and these mutants have dramatic changes in physiology, with increased resistance against microsporidia and virus infection, among other phenotypes (see below). Nearly all of the pals-22 phenotypes are reversed by mutations in the pals-25 gene, which is in an operon with pals-22. Thus wild-type pals-22 is a repressor and wild-type pals-25 is an activator of the IPR program, and we refer to them as ‘antagonistic paralogs’ (Reddy et al, 2019). We are currently investigating how pals-22 and pals-25 regulate the diverse set of phenotypes associated with the IPR, including increased pathogen resistance.

One striking phenotype in pals-22 mutants is increased tolerance of thermal stress and lowered levels of protein aggregates. Both of these phenotypes can be reversed by loss of one IPR gene, the cullin cul-6, which is predicted to act in a cullin ring ligase complex. We have recently found binding partners for the CUL-6 protein that act with CUL-6 to promote proteostasis capacity (Panek et al, 2020). We are continuing to define the components of this complex, as well as the targets they ubiquitylate, to understand how the IPR regulates protein homeostasis.

The microsporidia phylum has over 1400 species of pathogens that can infect nearly all animals. They are responsible for significant economic impact due to infections in agriculturally relevant hosts like fish and insects, and can also cause lethal disease in immunocompromised humans. There are no tools yet available for DNA transformation of microsporidia. We are currently testing methods of DNA delivery into microsporidia, as well as investigating a nanolucifersae read-out for gene expression in Nematocida parisii, with the goals of live labeling of these parasites, as well as testing gene function. We have also developed nanoluciferase expression in C. elegans as a sensitive and quantitative genetic reporter for the IPR.

Other Areas of Research

We have found that a strain of C. elegans from Hawaii (CB4856) has greatly enhanced resistance to Nematocida ironsii, in comparison to the normal laboratory strain of C. elegans from England (N2). This increased resistance is a complex trait, and is restricted to the first larval stage of life, which is also when Nematocida infection has the most impact on C. elegans fitness (Balla et al, 2015). This increased resistance is associated with better targeting of ubiquitin and the autophagy protein LGG-2 to parasite cells. Interestingly, loss of LGG-2 reduces resistance to Nematocida infection, but only in Hawaiian C. elegans, not in N2 (Balla, Lažetić and Troemel, 2019).

P. aeruginosa is a Gram-negative bacterial pathogen that is a leading cause of death in cystic fibrosis patients and burn patients. Using an intestinal infection model in C. elegans, we have described how C. elegans detects translational inhibition caused by P. aeruginosa Exotoxin A, and uses the transcription factors ZIP-2 and CEBP-2 to mediate induction of defense gene expression (Dunbar et al, 2012; Reddy et al, 2016).